Leominster's marquee- fit for a prince 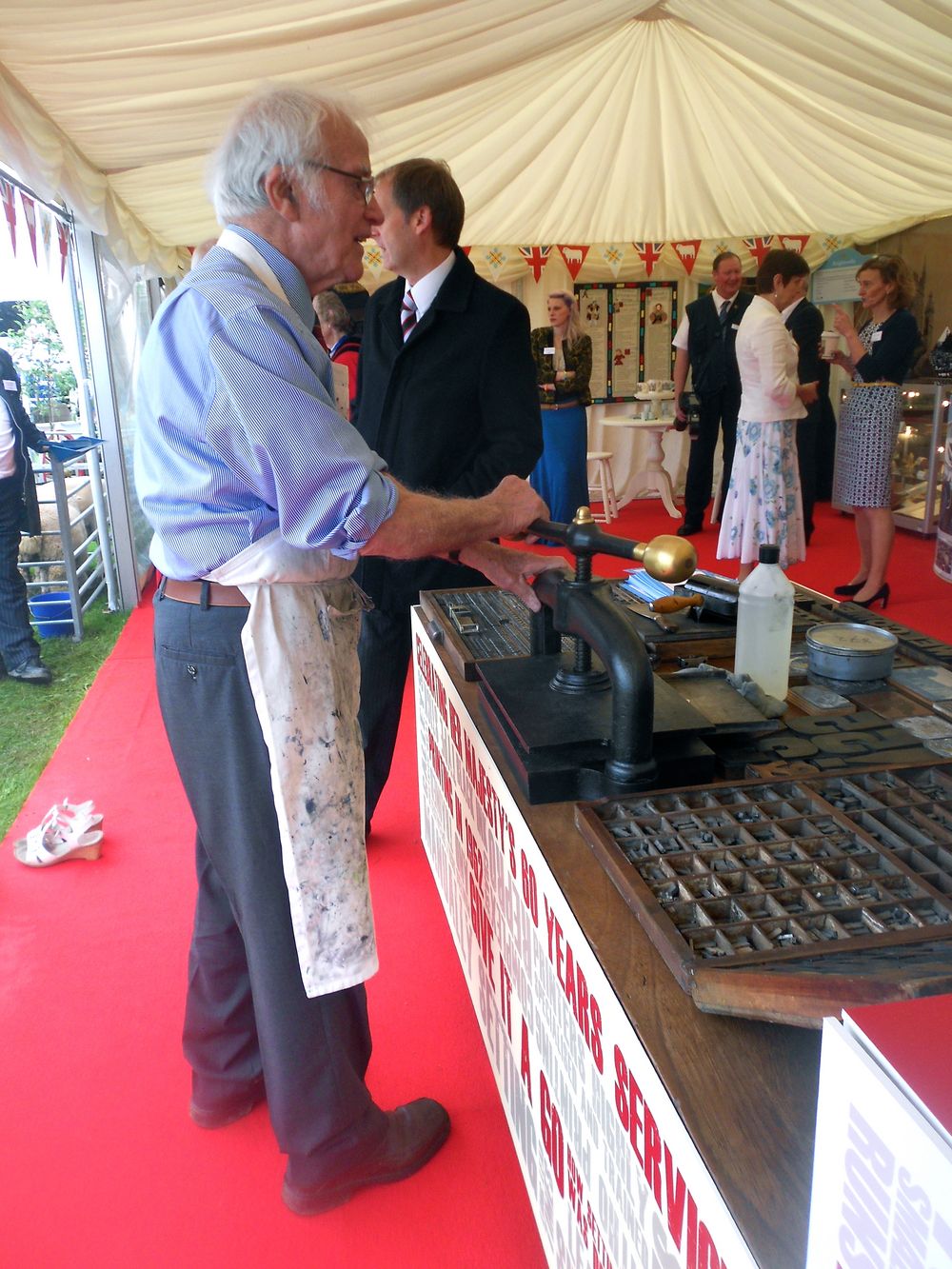 When Leominster was invited to showcase it's wares to the Royal Family there was only one thing to do ... call for Helen! And so it came to pass that a willing group of volunteers gave of their all to ensure Prince Philip left with an abiding impression.

On July the 11th we celebrated Diamond Day on The King George 5th Playing fields in Hereford. Her Majesty the Queen and the Duke of Edinburgh visited us for a very short period and Orphans had the privilege of helping to organise the Leominster Marquee which was to be visited by the Duke and then by lots of Herefordians who came to enjoy a special day out. The tent was full of life and colour, dressed with specially designed bunting and was quite a draw to the Public. We had a beautiful striking backdrop of Leominster created by Simon which brought out the black and white features of the Town in particular and in front of this we had carefully planned areas that were engaging and visually appealing.

Our theme was Living Leominster and the Ryeland sheep which made the Town famous in the 16th century were a focal point. The real Ryeland lent to us by Brenda and John MacCaull (the Mayor’s brother) were the initial draw and they were beautifully supported by Jeni Parker Ellsmore’s (our printer Steve’s daughter) full size model ones which attracted the Duke’s eye. Yvonne Baker showed us all how to spin the wool and we had lovely hats and bags on display made by the Sheep Shed and Hatty Baggins, two shops in Leominster who are really helping the revival of the Ryeland sheep and natural woollen products. 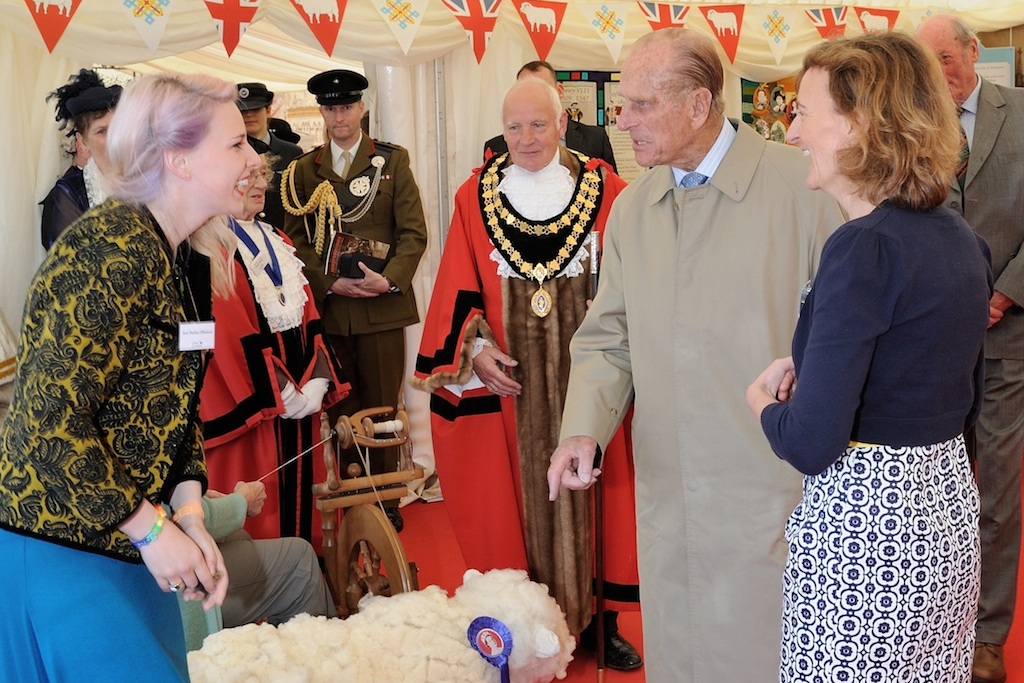 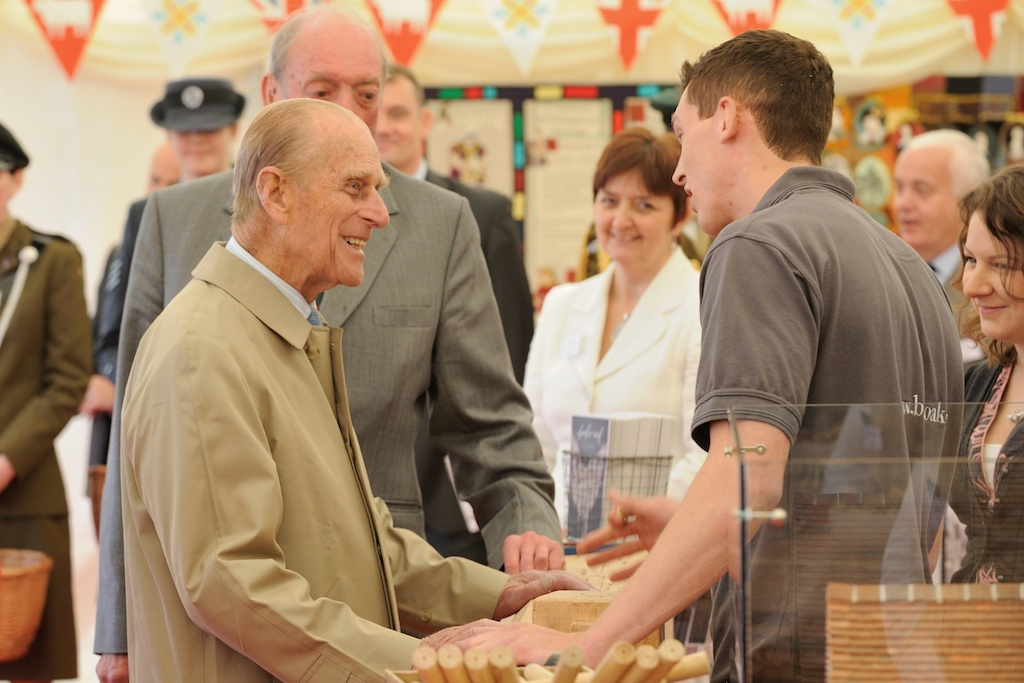 The Living Leominster logo was deliberately produced in black to link with another key exhibit - the black and white story. We featured the Black and White village trail promoted by Gill Ding from the Tourist Office, a great ambassador for Leominster, Grange Court which is being extensively refurbished ready to be opened as a community resource next year and Border Oak a successful Kingsland Company who specialise in building Timber framed houses crafted in Green Oak. Central to this feature was a beautifully hand carved Jubilee Pillar made by Border Oak especially for the day which will live in the grounds of Grange Court as a celebration of the Queen’s Diamond Jubilee. Prince Philip appeared to be enthralled by this pillar. He said he thought the pillar was fantastic and that he loved green oak. He also admired the craftsmanship required when building with oak and asked how we worked with the shrinkage. As Joe (A Border Oak carpenter) was about to start carving Prince Philip said 'Now is not a good time to make a mistake!' but he said Joe had done a great job so far.

Dick Ellison from Grange Court kept children amused later in the day with Tally sticks which they could make for themselves and gave them an understanding of this basic bartering tool (did you know it's where the word Broker comes from!) whilst Merry, Joe and Theo let them have a little go at carving the Oak.

Two other very busy stands were the Orphans one with Arthur and Rachel at the helm making commemorative certificates of the day with a combination of 2012 and 1952 technologies - a real winner with the public as you can see. 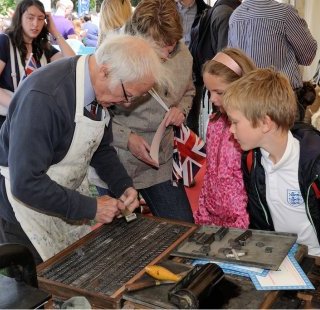 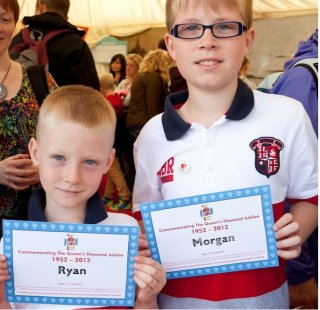 Brightwells had lots of antique memorabilia on display and then let children make their own commemorative mugs – there were some really cute ones being produced. Meanwhile Geoffrey kept everyone guessing with his unusual antiques which we had to identify- I’m not sure anyone was successful but there were some very funny guesses. Holly, one of our six fab Bridge Street Buddies who was helping Geoffrey took great pleasure in telling Prince Philip’s equerry all about the items and then used his gavel to sell them all to him!

As you moved down the tent then the age of the businesses got younger so we finished with Tyrrells and their specially designed Jubilee crisps in Red, white and blue. Cath White was over the moon to be introduced to Prince Philip by the Mayor and Prince Philip was very taken with the crisps he even reached out to grab some before he seemed to realise that he isn’t meant to eat on duty!! Cath introduced him to Megan a student at Westfield special school who had helped do some potato printing for the stand – a very memorable day for her indeed. 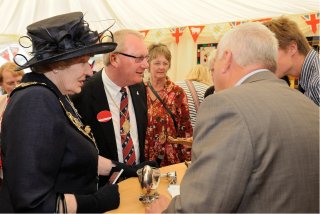 Geoffrey showing some of their antiques to the dignitary 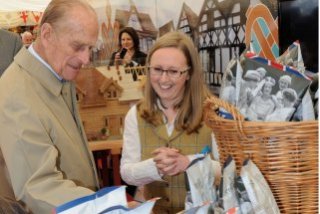 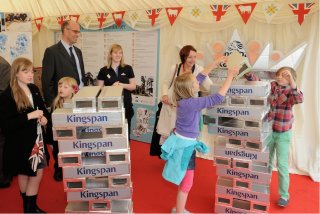 Children loved playing with the giant Jenga from Kingspan

And on to Kingspan who are a real creative bunch. Both John Garbutt and Peter Morgan had been influential in the tents design and they decided to make some giant Kingspan Jenga for everyone to enjoy which epitomised the spirit of the tent. We’d much rather play a game than learn about ‘insulation’ although John Treanor did try and explain the product not just once to Prince Philip but twice without success I believe. In charge of the Jenga were Chloe and Tom Earl Mortimer’s Head Boy and Head Girl who had the biggest privilege of their young lives so far in meeting Prince Philip (their words not mine but I’m sure that’s true).

The whole experience has been a bit surreal. A huge amount of work, numerous Leominster meetings either at Leominster Council or in a very hot meeting room at Orphans with Chris and Jimmy, then Peter and Clancy, then Dick, Gill and Merry, then over to Mike Patricks to survey the hay cart for the parade, then over to Hereford twice to be grilled about whether our offerings were really good enough and whether we really knew how to talk to Royalty and then finally to our own two rehearsals one to make sure the Mayor handed over to me properly and that I did to Gill (May I present...) and that I didn’t get my words mixed up (“and this is Brightwells who sell classic cars at Cheltenham” - please don’t let me say that on the day!) with Iain the Town Clerk timing us and Jimmy saying – and THIS IS LEOMINSTER—sell it for goodness sake! And the last one down at Bridge Street to make sure we had got all our dimensions right and that we All understood the ‘Royal walk through’.

All this work for a 3 minute visit to our tent but was it worth it? The answer has to be a definite ‘yes’ and I’m still saying that three days later. All of us involved had a fabulous day. Not only with the excitement of the Royal visit but with the sheer buzz and enthusiasm of all our visitors who really appreciated our efforts. It was the joy of the shared experience and we are all proud of what we jointly achieved. I have thoroughly enjoyed working with everyone involved. Goodness knows how I’d feel if It had been a really big event! 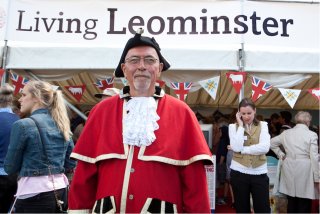 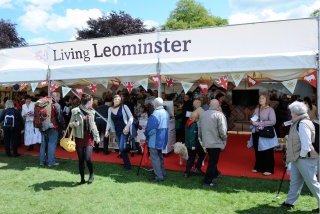 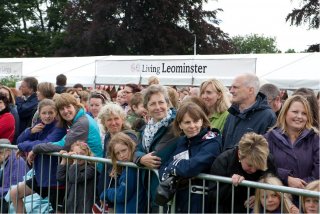 The organisers of Herefordshire's Diamond Day have received the following letter from Buckingham Palace. What a wonderful end to the whole experience. 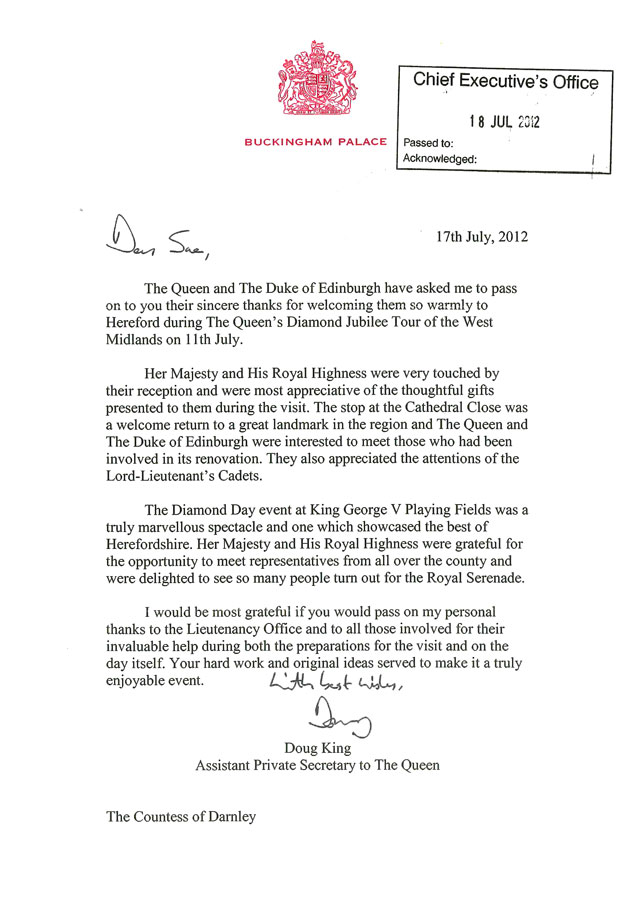 The notion of corporate social responsibility was probably not uppermost in the mind of Henry Stanley Newman when, in 1873, he saw the benefits of providing the orphans in his care with a printing press. In these early days Orphans Press didn't need to look beyond its own front door for worthy candidates to support.