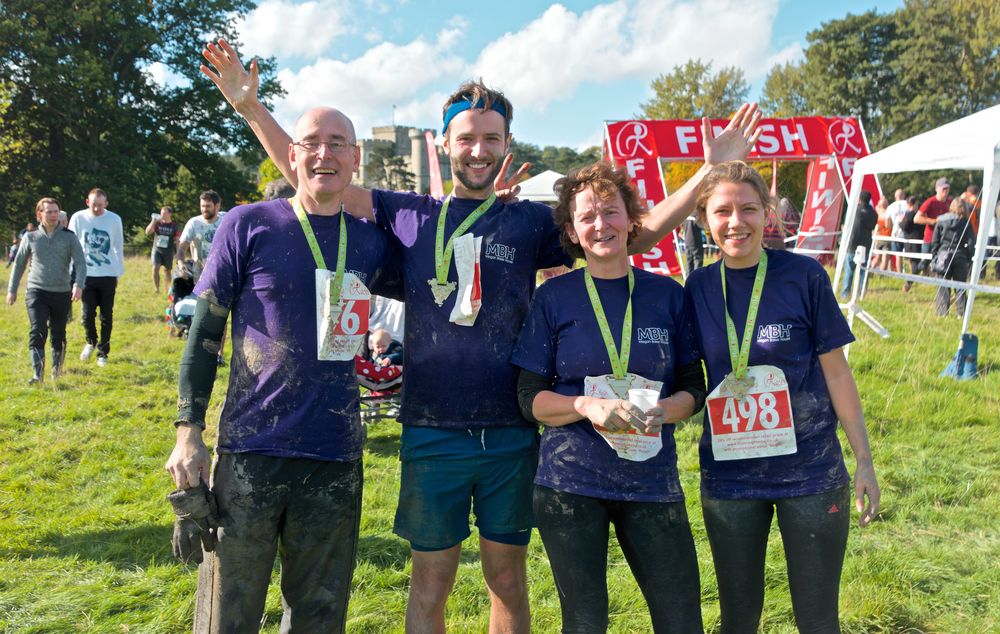 We recently took part in the Eastnor Castle Mud Run to raise money for local charity Megan Baker House. Thank you so much to everyone who sponsored us - we did it!

At 10am we lined up on the starting line, all kitted out in our 80s headbands and matching T-shirts. The sun was shining. We were raring to go. It hadn't rained for ages - how muddy could this mud run malarkey actually be?

Before we knew it, we were off. So far so good: a little stream - we were over in a flash. A woodland path - this was pretty. A slight incline - no problemo.

And then we came to our first obstacle. To the seasoned mud runners sprinting past us, it was an enjoyable puddle. To us, it was an insurmountable crater of thick, brown, gloopy mud. Only one thing for it! Suddenly, we found ourselves waist deep in the good stuff - just like being at a spa, right? - clinging onto branches, thorns, rocks - anything that might help us clamber out the other side. Hmmm, maybe this was going to be tougher than we thought!

We won't take you round the entire course blow-by-blow, but it's safe to say it was less of a run and more of a slide-crawl-drag/whatever-gets-you-to-the-finish-line! There was much bonding, quite a few expletives and more than a few hilarious moments (largely when it took four men to haul Helen and Emma out of a particularly deep hole!), but, ten kilometeres later, we arrived at the finishing line - caked in mud from our eyebrows to our toes. Not a pretty sight (!), but it was worth every second because, thanks to you guys - our lovely clients, we’ve raised £1,485 for Megan Baker House.

A huge thank you to everyone who sponsored us and got us round the course - and to everyone who cheered us on. Megan Baker House do incredible work helping children, teenagers and adults with special educational needs and physical disabilities such as cerebral palsy, strokes, dyspraxia and early-on-set Parkinson's disease. Your support means the world.

Now to start planning our next challenge!